Rufus Ogundele: The Picasso of Africa

For over three decades, the Nimbus Africa Centre through its various incarnations, has been at the forefront of promoting and presenting African art in its purest and most dynamic form to local and international audiences.

Pioneering Nigeria’s premier art auction at the turn of the millennium, the gallery set the stage for the current boom within the secondary art market. This farsighted initiative proved to be the catalyst and template for the global rise in the sale of African art through the auctioneering platform; giving rise to the emergence of both established and fledgling auction houses into the African art world space.

Prophetically titled “Before the Hammer Falls”, the auction posted record breaking sales figures for the time while shedding luminous light on the awesome talent of modern maters like; Enwonwu, Osawe, Ogundele, Bruce Onobrakpeya and many others. It revealed for the world to see, the unseen thread connecting the works of these contemporary giants to the timeless masterpieces of antiquity, forged in the ancient furnaces of Igbo Ukwu, Ife, Benin and Nok.
In 2001, Nimbus hosted celebrated Ghanaian master sculptor EL Anatsui as he exhibited a number of his signature wooden panel assemblages alongside the works of ten of his most gifted graduates from the University of Nsukka. The success of that show titled; “New Energies” further established the Nimbus as a force for dynamic change in contemporary African art while cementing the institutions long standing relationship with the artist

As the title suggested, “New Energies” articulated Prof. Anatsui’s unbridled vision as artist, teacher and agent provocateur, liberating first himself and then his wards from the rigid confines of fixed formal expressions. Blurring the chromatic and structural lines separating the painter from the sculptor, his works present the artist primarily as the gate keeper who holds the keys to unlocking otherworldly portals and possibilities.

In the twenty years since the unveiling of El Anatsui’s New Energies, the Nimbus has experienced numerous incarnations exhibiting and inspiring countless artists gallerists, cultural entrepreneurs and auction houses.

When the proverbial hammer final fell and bulldozed the physical structure of the Nimbus Art Centre in to a pile of rubble in 2005, the logos dipped under the radar to re-emerge as “The Nimbus Unerground.”

Forced to survive on the walls and creative fixtures and fittings of the Bogobiri House (Nigeria’s premier boutique hotel established in 2004) the nimbus 2000 became the unseen force driving this innovative new cultural hub and other similar ventures within the Lagos metropolis.
Perfectly situated directly opposite the original Nimbus, the Bogobiri House proved as iconic a venue as the nimbus. Hosting numerous musical events, theatre productions and even weddings in an ungoing seventeen year sojourn, Bogobiri presented a novel and authentic West African backdrop for a new generation of Afrobeats musicians.

After a six year hiatus hiding in plane sight, the New Nimbus Art Centre was opened on the roof top of the Bogobiri House on September 4th 2011. The reopening of the Nimbus directly opposite its derelict spiritual birthplace graphically illustrated for all to see, the supremacy of cultural activism over the dark machinations of the formidable capitalist machinery and system. It confirmed that the people’s innate DNA could form the essential building blocks of a new Nation founded on the ancient wisdom and ancestral pride of the Negus. Like the mythical Phoenix, the New Nimbus arose from the aches of the old to celebrate the preeminence of culture and creativity over state power and might. Its inaugural exhibition titled; Metanoia featuring the works of; Enwonwu, Osawe, Kolade Oshinowo and Rufus Ogundele, was opened by his Highness Igwe Alfred Nnaemeka Achebe Agbogidi, Obi of Onitsha. Also in attendance as guest of honour was Afrobeat king Femi Anikulapo Kuti and a roll call of the cream of Nigeria’s artistic family.

Ten years along this new road of Metanoia, the New Nimbus experienced a transatlantic awakening by virtue of a spiritual union and creative partnership with Pure Lagos African art gallery in Norfolk Virginia. Established in 2018 and meticulously curated by owner Sia Alexander (a six generation Virginia native and descendant of Afro union Patriot heroes) this triumvirate of galleries fully expressed the Mind, body and soul of the contemporary African. With the advent/rebirth of the Nimbus in February of 2021, Pure Lagos and Nimbus merged to present a new foundation for showcasing contemporary Africa in a glorious new light.

This ancient yet modern creative platform was modeled along the cardinal points of the four Igbo market days; Eke- East, Orie-West, Afor-North and Nkwo-South. These market days, created by “Chi-Neke” (the all mighty creator God of the Igbo nation) represent the four sacred spaces celebrating the union between The Nimbus and it’s sister organization; Pure Lagos.

Located at Selden Market on 208East Main Street this groundbreaking first Pure Lagos representing ‘Eke’ (the first market day of the four day Igbo week) manifests the righteous Igbo concept of ‘Omenala’. It’s emergence in 2018 poured creative libations on the soil of Virginia to appease the souls of millions of Africans lost in the four hundred year human tragedy known today as the transatlantic slave trade. Orchestrated by the west, this illegal enterprise devastated the African continent and robbed the land of millions of its sons and daughter. It seemed fitting that Omenala be observed in the highest tradition and practice of the ancient Igbo as the first phase of the recolouring of this human horror story. Boasting high quality arts, craft and herbs from the soil (Ala) of Africa this first Igbo Landing was instrumental in the unfolding success story of Pure Lagos African art gallery.

Within two years of the eastern Main Street unveiling of Pure Lagos at Selden market, the gallery migrated west to establish a new art gallery at the Internationally acclaimed MacArthur Centre. Located at 300 Monticello Avenue, suite 212, the gallery represented ‘Orie’ (the second Igbo market day) and emphasized the concept of ‘Udo’, community and harmony. Presented in the quintessential western gallery style, this incarnation of Pure Lagos offers a celebration of communal life through the visual arts. Pride of place in this collection undoubtedly goes to El Anatsui’s “Tucities” a magnificent 4feet by 6feet wooden panel assemblage which connects the east with the west in a breathtaking display of art imitating life.

As though this was not cause enough to revel, the arrival of the spiritual Nimbus to the same MacArthur venue brought the third Igbo market day ‘Afor’ with the force of a powerful northerly wind.

Bringing with it priceless treasures symbolized by the Igbo concept of Nwaka-ego (the child is greater than monetary wealth) this sacred union birthed the Nimbus Africa Centre, an exclusive exhibition space showcasing monthly art exhibitions of the purest, most dynamic works from the African continent. Opening with the long awaited solo exhibition of Rufus Ogundele’s never before seen last works, the Nimbus Africa Centre and resource library is a gift to the diaspora from the children of Africa. In partnership with the MacArthur Centre, the gallery’s upcoming exhibition roster extends in to 2022 and includes proposed shows and exhibitions with iconic African artists like; Afro beat king Femi Anikulapo Kuti, acclaimed photojournalist Tam Fiofori, artists Tola Wewe and Prof. Moyo Okediji. The centre also plans to exhibit the works of a talented new generation of Nigerian artists headlined by; Gab Awusa, Joseph Eze and Dotun Abiola. Additionally starting this summer the centre will be showcasing six months of the exhibitions by the leading female artists from west Africa as it brings to life the deeper essence of the concept of Nwaka-ego ( the girl child is greater than monetary wealth)

Coming full circle back to our starting point, the final leg of our journey takes us back to the future and the new beginning of a bygone era. An era that began a century ago when according to the writers of “Twenty two years of Freedom” descendants of West Africans owned hotels, restaurants and art galleries in the Freemason district of Norfolk. Situated on Bute Street in the heart of the Freemason district, the fourth cardinal point of Pure Lagos, symbolizing ‘Nkwo’ (the fourth market day of the Igbo week) represents a retracing of steps to a point of metanoia where the original journey began. With dual attractions of Twin 77’s 1988 masterpiece “King of Birds” (an ode to the Yoruba origins of the Egyptian sky god Horus) and El Anatsui’s 2020 “Mindgames”, this home gallery is a sanctuary steeped in the warmest African traditions. Connecting the finest elements of the other three locations in a seamless tableau of Afropolitan metanoia, the Bute Street location represents a triumphant homecoming of a legacy of African excellence which started with the arrival of the first Africans to the Americas over a thousand years before the coming of Christopher Columbus. With a legacy built on the four pillars of Igbo societal values and African cosmology, Pure Lagos is focused on redefining Africa’s artistic landscape one step at a time and one visitor at a time.
Welcome to Africa’s tomorrow
Today.
Joseph C. Nwagbogu
2-11-21 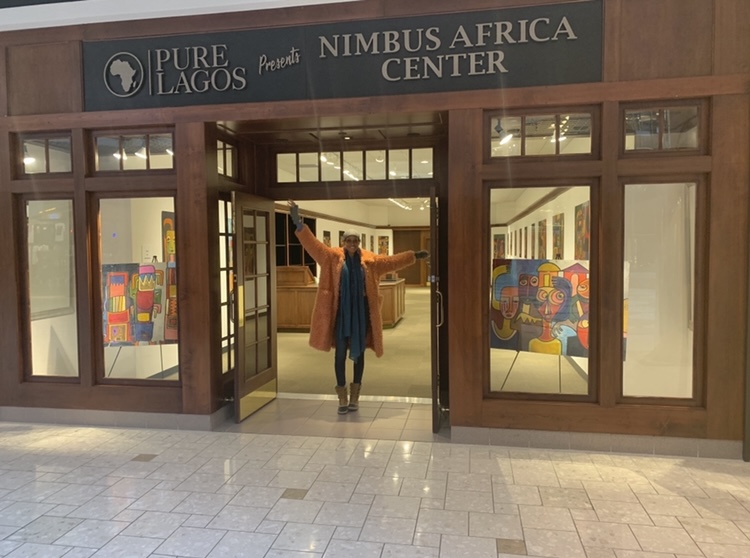