This October brings with it the fifth NEON Festival, marking five years of murals, performance, new local businesses, and creative people being creative in the neighborhood that will go down as the first arts district in Hampton Roads.

A half decade is nothing in the story of a neighborhood with a future as bright as the NEON. Here are five reasons why the best might well be yet to come.

TCC Visual Arts Is About to Plant a Very Big Flag

“What a golden opportunity,” said Matt Baumgarten, Executive Director of the TCC Real Estate Foundation and Chief Operating Officer for Facilities and Public Safety. “We never imagined another opportunity like this to be a catalyst for downtown Norfolk.”

For those that were not around downtown Norfolk back in the 90s when TCC opened its south-of-Brambleton campus, it was a major game changer, to say the least. Nothing adds genuine vibrancy to a neighborhood faster than hundreds of excited students and educators.

“It brought life to Granby,” said Baumgarten. “I moved down here in ‘92, and there was nothing going on on Granby. There was no life. Now you’ve got all this student, faculty, and staff moving around. I saw it -- the restaurants started coming back. It brought a reason to be downtown at night. You can see the difference.... It’s a huge impact on a daily basis.”

Baumgarten expects 2,000 new bodies in the NEON every week once the new 47,000-square-foot TCC Perry Center for Visual & Culinary Arts and Hospitality Management opens up. The kitchen staffs at all the restaurants in the NEON better be ready, because they’re going to be working.

Big money is going toward this new center, including $500,000 from TowneBank, and $500,000 from the Hampton Roads Community Foundation. Once those doors open, things in the NEON will never be the same. 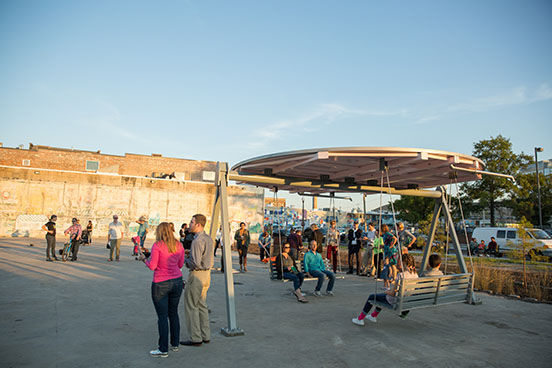 The NEON Will Have Its Own Version of a Park

Those familiar with the NEON District know the lot: at the corner of Olney and Wilson sits a lot that is largely vacant except for a lovely bench swing commissioned by Norfolk’s Public Art Commission. Known colloquially as the Cofer Lot, it won’t sit undeveloped for long.

“The Cofer lot is zoned as an Open Space and Preservation District,” noted Norfolk City Councilperson Courtney Doyle, who represents the NEON. “I hope we continue to use this open space to host all sorts of public gatherings such as community events, festivals, and First Fridays.”

The Open Space distinction is important. It essentially means that this lot will be some kind of park; the content of which is still TBD. But it’s fun to dream.

Will it include a sculpture garden? A climbing wall? A basketball court? A bandshell? Skate-able elements? Whatever it becomes, it will be more fun than a largely-empty lot, and that’s exciting.

The Chrysler Museum’s Glass Studio is already a jewel of the NEON. It’s a place where the entire community can learn the art of glass blowing, and experience some of the most innovative performance art on the East Coast. If all goes according to plan, the Glass Studio will hit the next level in the coming years.

Work Program Architects, who designed the expansion, describes it as adding, “a theater-style performance hot shop, retail, gallery, classrooms, research lab, roof garden, catering kitchen, and event space,” they said. “It will be a bold extension of the Museum and its educational programs.”

While not quite yet a reality, these visions for expansion are certainly cause for excitement. The Glass Studio was already the hub of an international glass art conference. What could be next?

“We’re exploring the feasibility of making some very positive improvements to the space that will help us bring even more amazing glass experiences to Norfolk,” said Robin Rogers, Glass Studio Manager and Program Director. “When we have completed that process, we’ll be able to assess our next steps to bring those goals to reality.” 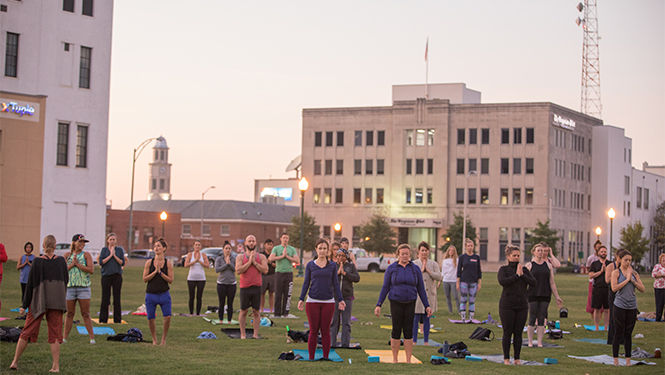 With the Virginian-Pilot HQ for Sale, the NEON Will Get a Huge New Neighbor

“I’ll tell you what’s a big variable right now in the NEON is the Virginian-Pilot building,” said TCC’s Baumgarten. “Now that that’s on the market…. That’s going to make a movement.”

The Virginian-Pilot occupies one of the biggest footprints in all of downtown Norfolk. Experts predict that the new owners of the property -- who are not yet determined -- are likely to build a mixed use, mixed income development that features even more residential units, businesses, and parking options coming to the neighborhood.

The possibilities are limitless for what could occur on that prime property that sits on the border between the NEON and the rest of downtown. It’s fun to speculate: could the new development have a roller rink? An indie movie theater…. Or a film studio? Could another local university seize the opportunity to join the vitality downtown, or another large corporation see it as the perfect opportunity to bring their headquarters -- and jobs -- to the NEON?

“I’d like to see (what goes there) accommodate creative industry and arts,” said the Downtown Norfolk Council’s Mary Miller, who noted the specific need for artist-friendly living and work spaces in the NEON.

There Are Numerous Undeveloped -- or Transitioning -- Lots (+ Walls!)  in the Neighborhood

There are a host of other properties in the NEON that are either vacant lots, for sale, or primed to be redeveloped for modern uses that fit with the character of the arts district.

“We hope to have neighbors who support and complement the NEON’s mission and foster a creative community,” said Erik Neil, Chrysler Museum of Art’s Director and CEO. “I’d love to see more dining options, because restaurants can entice people into the neighborhood to make a day of it and explore.”

Norfolk City Councilperson Andria McClellan, who also represents the neighborhood, is hoping for functionality and fun to fill some of the spots.

“I often hear about the need for an art supply store, which would seem to be apropos for an arts district,” she said. “Also, noting that retail is pretty challenging, a business that provides an ‘experience’ of some sort (with an arts bent) would seem to be a good draw.”

Along with new businesses and developments, expect a steady stream of new murals, street art, and sculptures. There will be five new pieces of public art for this year’s NEON Festival (October 17 and 18, 2019), and the Governor’s School students never seem to stop making inspired public art in the neighborhood.

“Our GSA students love creating their original art in the district right now!” said GSA’s Assistant Director Deborah Thorpe. “They feel ownership and are proud to be a part of a growing neighborhood.”

As our community grows, so do all of us, and vice versa. It’s a virtuous cycle of creativity, positivity, and togetherness, alive and well in the NEON.

“Norfolk is a creative city open to new ideas,” said the DNC’s Miller. “We need to continue to go down that path.”