He is considered Jamaica’s greatest practicing singer/songwriter and anyone who has listened to his CDs or experienced the fervor elicited by his live performances would undoubtedly agree with that top-ranking assessment. His recent appearance at Jamaica’s premier music festival, Reggae Sumfest, was unanimously hailed as the finest of the three-night event as he tore through hit after hit, some dating back to the mid 70s, consistently captivating an audience of nearly 20,000 who sang along so loudly to his beloved songs, they sometimes threatened to drown him out. That Sumfest 2008 performance was but another special moment in time within this adored artist’s enduring and truly exceptional career.

The passionate singing, superb songwriting and consummate showmanship displayed by Beres Hammond at Sumfest, which has distinguished his music over the past 35 years, brilliantly shines throughout his latest release, the aptly titled “A Moment In Time”. Estimated by Beres to be his 25th album, “A Moment In Time” offers organically crafted rhythms, created by Jamaica’s finest musicians, ranging from sultry R&B to rousing gospel accents, avant-garde jazz to mesmerizing roots reggae. An almost entirely self produced effort recorded at Beres’ Harmony House studio in Kingston, “A Moment In Time” features fourteen new selections including the devotional “I’ll Live Again”, a percussive driven homage to the motherland “Talking Africa” and several lovers rock tunes reflecting the vicissitudes of romantic relationships for which Beres sets the standard in contemporary (Jamaican) music. “Reggae is my foundation so I give much respect and love to it, but I don’t call myself a reggae singer, the Father would never forgive me for that,” says the 53 year old singer/songwriter/producer. “I sing what feels good, so any which form the music comes in, a hard-core reggae vibe or a little more subtle, you find a rhythm that complements what you are saying. When I started out, I never saw R&B, reggae, ballads, no, I just knew I had a voice and I wanted to make music that fits the voice.”

And oh, what a voice it is! Beres’ delivery, as rich and flavorfully bittersweet as dark chocolate, embodies the spiritual passion heard in the secular ballads of Sam Cooke, the laid back cool of Marvin Gaye and the gut wrenching “Pain In My Heart” grit of Otis Redding. The aforementioned soul icons profoundly influenced Beres in his youth, as did such Jamaican greats as Leroy Sibbles, lead singer of the Heptones, velvety vocalist Ken Boothe and legendary singer Alton Ellis, one of the pioneers of Jamaica’s rock steady, reggae’s direct forerunner. It was Alton, Beres says, “who reassured me that I should use melody in my style.”

That haunting melodic quality, which has kept Beres’ fans singing along for decades, is strikingly evident throughout “A Moment In Time”. The first single “I Feel Good”, produced by Donovan Germain, the founder of the Jamaican label Penthouse Records, is a delightful lovers rock gem sweetened by Beres’ irresistible crooning “feels good to be wrapped up in your arms, dancing to a reggae song”. The jaunty “No Goodbye” reworks a vintage Jamaican rhythm, as Beres contemplates leaving a relationship but upon deeper reflection, is unable to do so. “Still Will Be Heaven” features Beres’ poignant musings on a union that has withstood the test of time, as set to a sublime reggae beat, embellished with celestial violin strains. The title track’s inference that life can offer instantaneous changes (“it takes one moment in time to change your life forever”) was inspired by the song’s jazzy rhythm created by Beres’ daughter Nastassja; it marks the first time her music has appeared on one of her father’s CD. “When she played the rhythm for me, this is the song that I heard in my head,” explained Beres, “and now one moment in time changed her life. Its like that’s what that rhythm was telling me.” Each track presents a distinctive offering characterized by Beres’ nuanced, true-to-life lyrical depictions and quintessential sweet-and-smoky vocals. “There is so much of myself in every song I do,” Beres adds. “When you go into the studio, producers say you have to get into this kind of beat but my thing is different. I just record a song in the manner it comes to me. I don’t change nothing, and it always seem not to be wrong, yuh know?”

For the past thirty-five years, despite inevitable career trials and tribulations, the music of Hugh Beresford Hammond has yet to be wrong. The ninth of ten children born in Jamaica’s garden parish St. Mary, on August 28, 1955, Beres, as a precocious child, made regular trips to Kingston to mingle with the singers who frequented the downtown record shops.

After graduating from high school, Beres entered several local talent shows including the Merritone Amateur Talent Contest, where several reggae stars including vocal trio The Mighty Diamonds, Sugar Minott and the late Jacob 'Killer' Miller also got their starts. He joined the fusion band Zap Pow as lead singer in 1975 and remained with them for four years recording the albums Zap Pow (Mango, 1978), and Reggae Rules (Rhino Records, 1980) while simultaneously pursuing solo projects. But Beres quickly realized he “couldn’t serve two masters” and decided to concentrate on his individual efforts.

Beres’ 1976 solo album Soul Reggae (Aquarius Records) produced by his friend Willie Lindo sold more than 2,000 copies in Jamaica during the first week of its release. His subsequent single “One Step Ahead”, still a favorite among Beres’ fans because of his signature impassioned vocals, held the number one spot on the Jamaican charts for three and a half months. Despite the popularity of his music, Beres failed to reap any financial rewards. Frustrated, he dropped out of the music business, then regrouped and formed his own record label/production company, Harmony House, in the early 80s.

Beres’ Harmony House debut single “Groovy Little Thing” marked the first time he reaped financial rewards from his music; a succession of hit singles recorded for various Jamaican producers followed including 1987’s “What One Dance Can Do” which entered the national charts in England and elicited a spate of answer records including Beres’ own “She Loves Me Now”. Further acclaim arrived in 1990 when Beres joined forces with his good friend Donovan Germain whose Penthouse Records dominated the Jamaican charts in the early 90s with hits by Buju Banton, Wayne Wonder and others. Donovan asked Beres to record vocals over a rhythm track he had; Beres barely remembered recording “Tempted to Touch” but the song shot to the top of reggae charts around the world, as did the ensuing hits “Is This A Sign”, “Respect To You Baby” and “Feeling Lonely”, all featured on his Penthouse album “A Love Affair”.

Beres maintained his presence on the reggae charts as the 90s progressed so it was inevitable he would attract major label interest. He signed to Elektra Records for whom he released the outstanding CD “In Control” in 1994. The CD’s spectacular R&B flavored single “No Disturb Sign”, still one Beres’ most popular songs, did not yield the desired international breakthrough although Beres would have easily captured the same fan base as Teddy Pendergrass or any other sophisticated soulful crooner, had “In Control” been given proper support by Elektra’s publicity/marketing machinery. “I never liked how I was treated; it was my first album on a major label, I think they should have paid more attention to it,” Beres declares. “There was a changing of the guard at the label which made things worse. But still, there are many artists who have been on the Billboard charts and don’t have the kind of fan base I have now so I am alright!”

Undeterred, Beres continued to release music on his Harmony House label with distribution through VP Records. He has maintained his hit-making streak well into the 21st century while his incomparable, riveting live performances recruit legions of new fans from 9 to 90 years old.

Beres’ heartfelt delivery reinforces his unique perspective on romance, detailing everything from the sly antics of the philandering male on “Double Trouble” to championing the overlooked female on “Show It Off” to celebrating an inevitable relationship in “They Gonna Talk”, from his 2001 Grammy nominated album “Music Is Life”.

But Beres’ catalogue is also rife with uplifting anthems for the downtrodden including the 1978 hit “Last War” (heavily sampled in Collie Buddz’ 2007 breakthrough hit “Come Around”), the timeless “Putting Up Resistance”, the most popular reggae song of 1990/91 and the viscerally empowering “Not Over Until Its Done” from his 2004 release “Love Has No Boundaries”. In this inspirational vein “A Moment in Time” offers “Picking Up The Pieces”, its shimmering, R&B inflected rhythm underscoring a clarion call for peace, as Beres sings: “Pull ourselves together, try to sort it out, gather all peace makers, scattered all about/find a new direction this one ain’t working out/ talking to all of those with the clout.” The song was inspired by various global maladies from Jamaica’s escalating crime rate to the never-ending war in Iraq, as well as the role Beres ideally sees music playing in redirecting our individual actions towards making the world a better place. “When I see so much bad news I say Beres why do you keep singing so much love songs, are they listening or what?” he wondered aloud. “That’s what that song is about; every time I try, something else happens. Nevertheless I am still going to try because when I see the smiles on peoples faces as I perform, that gives me strength to keep going”

Those smiles reflect the many special moments in time that Beres Hammond has brought to his fans, moments that have changed their lives, and perhaps their perception of contemporary Jamaican music, forever. Beres isn’t sure how he has maintained his lyrical freshness, vocal excellence and sonic inspiration over the past thirty-five years, but he is not questioning it, either. “I just see myself as one of the instruments who come to do what they do. I don’t know what it is but it’s working and if its not broken, you don’t mend it.” 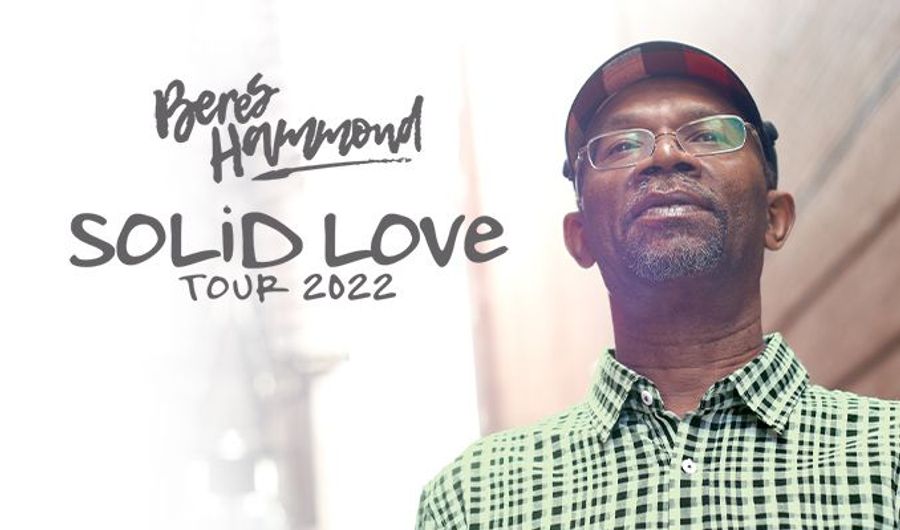