The Brinkley Family Memorial Lecture Series returns to Slover Library, bringing three renowned authors to Norfolk, Virginia to discuss their books on this year's theme: "The Passion of Grit and Determination."

The first lecture of the 2021-2022 season features William Geroux, author of The Mathews Men: Seven Brothers and the War Against Hitler's U-Boats. William Geroux’s book tells the largely forgotten story of the U.S. Merchant Marine in World War II through the adventures of merchant mariners from Mathews County, Virginia. Mathews, a rural outpost on the western shore of the Chesapeake Bay, has been a cradle of merchant sea captains and mariners since before the American Revolution. When America entered World War II in December 1941, Mathews mariners were serving on freighters and tankers throughout the war zones, hauling vital war cargo. They and their ships became prime targets for German U-boats trying to choke off the Allied supply line. The U.S. Navy initially lacked the forces and inclination to protect the unarmed merchant ships, even in U.S. waters within sight of America’s coast, and the U-boats exacted a terrible toll. The mariners faced torpedo explosions, flaming oil slicks, storms, frigid water, shark attacks, and harrowing lifeboat odysseys—only to ship out again as soon as they’d returned to safety. The civilian U.S. Merchant Marine ended up suffering a higher casualty rate than any branch of America’s armed forces. Nearly every family in tiny Mathews (whose population during the war was roughly 7,500) had a personal stake in the fight, and none had a greater stake than the family of Capt. Jesse and Henrietta Hodges and their seven sons, who would experience the U-boat war to its fullest.

Free and Open to the public. 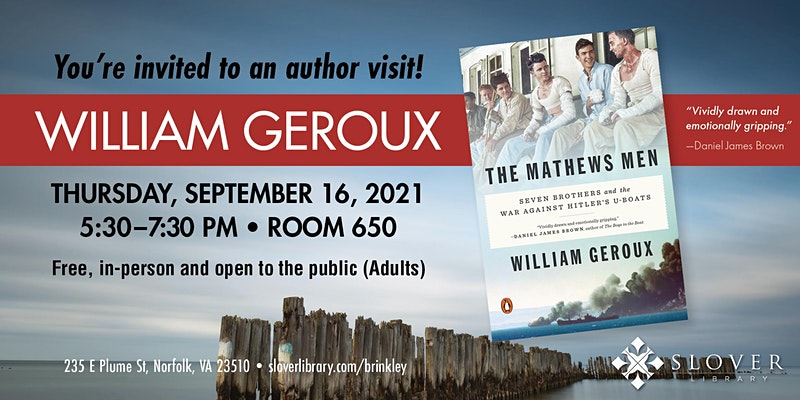