After so many months of uncertainty surrounding the pandemic, and its profound effect on the arts, we need a holiday celebration this year more than ever,” said Virginia Arts Festival Perry Artistic Director Robert W. Cross. “We are delighted to bring one of America’s favorite performers to our region to celebrate the holiday, and we look forward to sharing the show with our Festival fans.”

Beloved by fans for five decades, Marie Osmond rocketed to fame in 1973 with her Billboard-topping version of the country standard “Paper Roses;” and went on to chart multiple gold and platinum-selling hits, winning the Country Music Award in 1987. Her career has encompassed roles on Broadway (The King and I), prime-time and daytime television (“Donny & Marie,” “The Talk”), and authoring three New York Times best-selling books (Behind the Smile: My Journey Out, Might As Well Laugh About It Now, and The Key Is Love). She has entertained millions around the world through television, radio, film, live concerts and musical theater performances. As a philanthropist, she co-founded Children’s Miracle Network Hospitals, which has raised over $7 billion for children to date. Her most recent album, Music Is Medicine, encompasses a lifetime of experience encompassing music, love loss, hope and joy, and reached the Top 10 on both the Billboard Country Charts and iTunes Country Charts.

For the Norfolk concert, Marie Osmond will be joined by her nephew, Broadway and concert performer David Osmond, who performed the title role in Broadway’s Joseph and the Amazing Technicolor Dream Coat and is leader of The Osmonds 2nd Generation. The son of Marie’s brother Alan Osmond, David Osmond has multiple sclerosis and works to empower and inspire the MS community. The concert will also feature 2018 “America’s Got Talent” (AGT) finalist Daniel Emmett, whom Marie Osmond calls “a once in a generation voice.” A classical-pop crossover artist who brought the AGT judges to their feet in his duet with Plácido Domingo, he has released critically acclaimed recordings and headlined in Las Vegas since his television debut. Lending a spectacular musical backdrop to the concert will be the Virginia Symphony Orchestra, led by guest conductor Brent Havens, acclaimed for his performances with the London Royal Philharmonic, the Pittsburgh Symphony, the Dallas Symphony and many others. Havens is a Virginia Arts Festival fan favorite whose stunning re-creations of great rock concerts have included the Music of Led Zeppelin, the Rolling Stones and more. 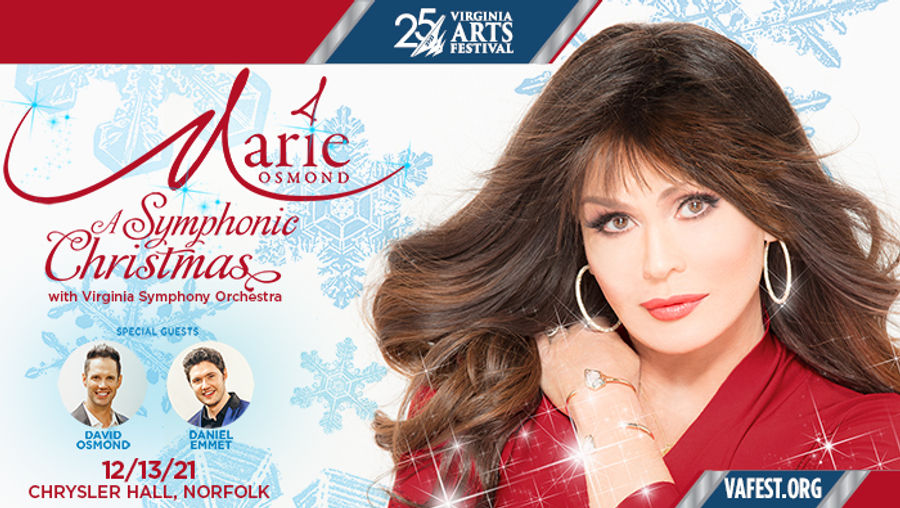