The Sound of Music

One of the most beloved musicals of all time, The Sound of Music, became a Broadway legend when it opened in 1959, capturing five Tony Awards including Best Musical; the film version released in 1965 won five Academy Awards including Best Picture. Set in 1938 and based on the story of the Trapp Family Singers, the musical is about a young Austrian postulant nun, Maria, who is sent to the villa of a retired naval officer and widower to be governess to his seven children. In the shadow of the Nazi invasion of their country, Maria brings love and music to the family. The score, which generations of fans can sing by heart, includes such memorable songs as "My Favorite Things," "Climb Ev'ry Mountain," "The Sound of Music," "Do-Re-Mi" and more.

The beloved Broadway classic leaps to life this spring with a new full production that joins the creative forces of three of Virginia's most-respected performing arts powerhouses: the Virginia Opera, whose annual performances in Norfolk, Richmond, and Fairfax have won it the designation as the Official Opera Company of the Commonwealth of Virginia; Virginia Arts Festival, whose yearly presentations include some of the greatest artists of music, ballet and theatre and draw tens of thousands of fans from across the region and the U.S., as well as internationally; and the Virginia Symphony Orchestra, whose performances in Norfolk, Virginia Beach and Williamsburg touch the lives of more than 100,000 adults and students each season.

The new production will be conducted by Rob Fisher, renowned on Broadway, television, and in recordings for his "nimble baton" that draws "attention to the intricacy and wit of the orchestrations" (The New York Times). Fisher's conducting on the Chicago Lyric Opera's 2014 production of The Sound of Music won rave reviews. Directing the new production will be one of opera and musical theatre's most notable new stars, Mary Birnbaum, who, with her new production of La Boheme, became the third woman in history to open the Santa Fe Opera season. Birnbaum's work at Opera Philadelphia, Seattle Opera, and Opera Columbus has won praise like this from the Houston Press: "a director of real quality, whose eye for the telling gesture, the perfect comic effect, or visual snap" keeps audience eyes glued to the stage. Festival fans will recall Mary Birnbaum's work as director of Kept, the 2017 world premiere opera commissioned by the Festival.

THE SOUND OF MUSIC is presented by arrangement with Concord Theatricals on behalf of The Rodgers & Hammerstein Organization.  www. concordtheatricals.com 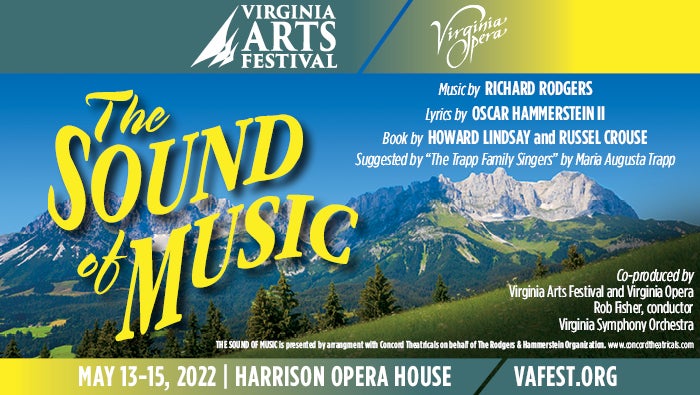