Laughter Class: The Nuts and Bolts of Running a Sketch Show

Laughter Class is a lecture series from the Push Comedy Theater that finds all-star comedians, actors, and performers from across the country to give a one hour lecture on their current passions. Learn the ins and outs of comedy from speakers including Emmy award winners, published writers, voice actors, theater directors, movie and TV stars, seasoned improvisers, sketch comedians, and more.

The Nuts and Bolts of Running a Sketch Show

Here's everything you need to know about producing your own sketch comedy show.  From the writing and rehearsal process, to promotion, to dealing with the venue, this lecture will give you some tips and tricks for running your show as smoothly as possible.  Whether you're a fledgling sketch comedian or an established group get the answers to all your burning sketch comedy questions.

About Sean Devereux:
Sean Devereux is the co-owner of The Push Comedy Theater and a founding member of the sketch and improv group, The Pushers.  He has been writing and performing sketch comedy for more than 15 years.  Sean is the co-writer of Cuff Me: The Fifty Shades of Gray Musical Parody and an Emmy award-winning producer for WVEC-TV13.

Zoom information will be sent via email an hour before each lecture.

Laughter Class has no prerequisites, no hidden tuition fees, and no mascot (yet). Individual lectures are $10 or subscribe monthly to get one lecture free each month. 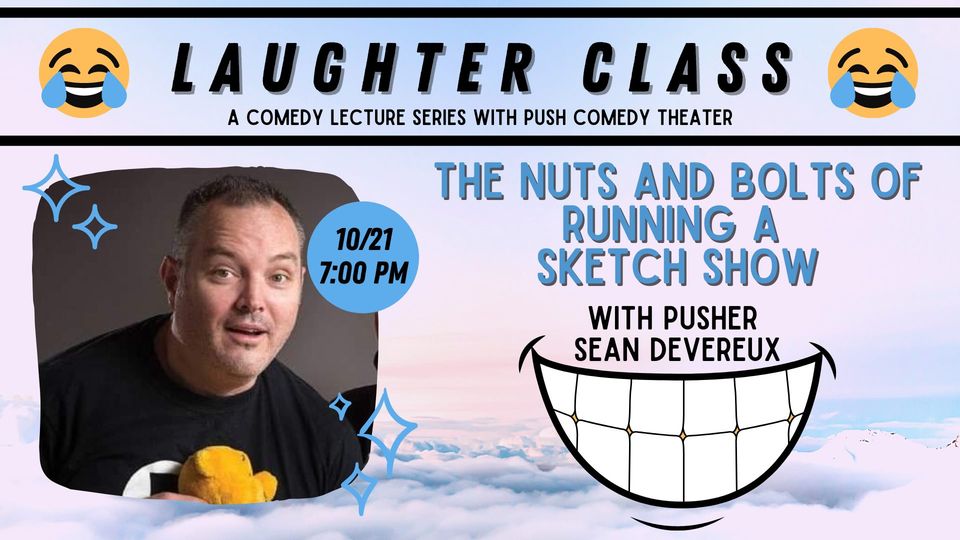